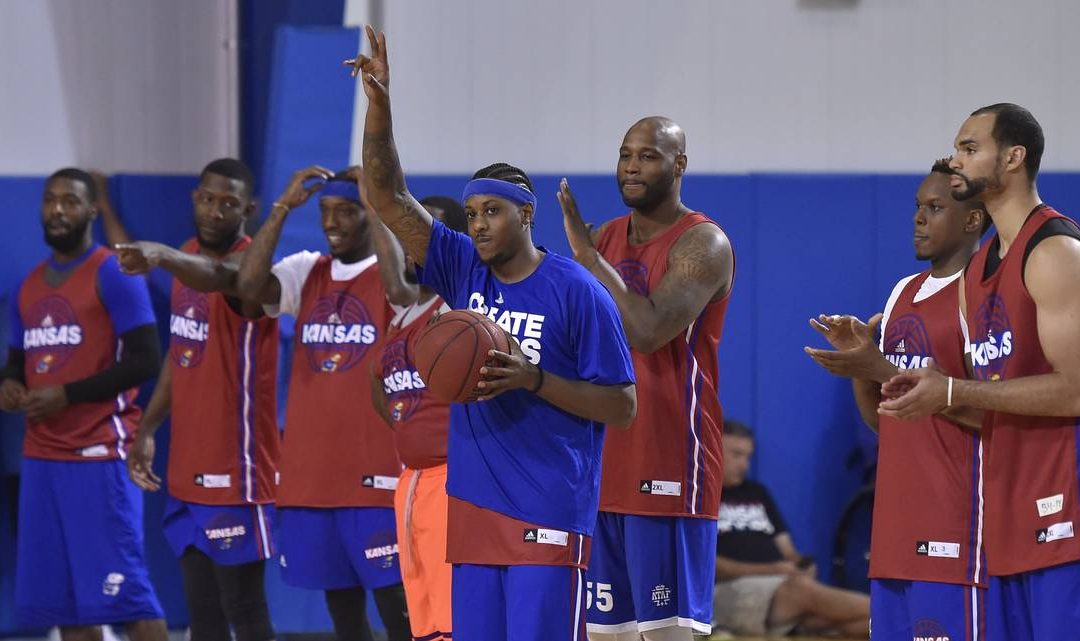 Ten-year NBA veteran Mario Chalmers has been playing basketball almost non-stop since sitting out the 2016-17 season, one in which he healed his ruptured right Achilles tendon.

Chalmers, the 32-year-old former KU combo guard who is best known for winning an NCAA title at Kansas (2008) and then two NBA championships with the Miami Heat (2012 and ’13), averaged 7.7 points across 66 games for the Memphis Grizzlies last season — for him a completely healthy season.

Since the end of that 2017-18 campaign, one in which he averaged 21.5 minutes per game, the 6-foot-2, 190-pound Chalmers has been competing in pro-am leagues in both Miami and Houston. The Grizzlies recently renounced his rights, meaning he is a free agent.

“I’m very proud. A lot of people don’t really come back from that injury,” Chalmers said Friday at Lawrence’s Schwegler Elementary School where his Mario V. Chalmers Foundation sponsored a “field day” for the Boys and Girls Club of Lawrence. The Foundation will also hold a bowling event Saturday and golf tournament Monday.

“Now it (recovering from Achilles tear) is more common. More people are doing it now. They can look at me for inspiration, see how I came back, look at Kobe (Bryant), how he came back. Players are proving they can come back from that injury.”

Chalmers — who has averaged 8.9 points (on 41.7 percent shooting, 35.1 percent from three), 3.7 assists and 2.5 rebounds in his pro career — said he’s confident he’ll play at the highest level at least three or four more seasons.

“I know I’ll be on a team next year. I’m not worried about that part,” Chalmers said. “I am still going, waiting on a contract right now. I’m right here, handling my event this time of year. I’ll figure my next move after that.

“It’s just a matter of time. They (NBA teams) are getting all the young guys, all the big free agents out of the way now. I’m just waiting my turn.”

Chalmers believes he has a lot to offer as either a starter or reserve point guard.

“I’m capable of doing everything they ask me to do,” Chalmers said. “At this point of my career I’m wanting what’s best for the team, what’s best for the organization, trying to take care of little things to keep me on the court and help a team win.”

Chalmers has taken on a new venture — book writing. He and his mom, Almarie, have co-authored the children’s book, “Mario Chalmers’ ABCs of Basketball,” with the subtitle “Dream Big. Think Big. Play Big.”

The book, which is illustrated by Emmanuel Everett, is available on Amazon.com.

“It’s a great way to mix ABCs and basketball together. It’s for kids from preschool all the way to third or fourth grade,” Chalmers said. “A lot of kids are playing basketball nowadays. This is a good way to have education and sports come together.”

Chalmers will have several book signings in coming days with proceeds to benefit his foundation as well as launch the #READWITHRIO children’s literacy initiative.

Chalmers — whose bowling event on Saturday in Lawrence also benefits Boys and Girls Club of Lawrence — said he enjoys working with that organization.

He said he seems to meet KU fans wherever he goes. His three-pointer, of course, sent the 2008 NCAA title game against Memphis into overtime. KU went on to win the game 75-68.

“That’s the thing about KU, the legacy here has lasted forever,” Chalmers said. “By me hitting that shot 10 years ago, it’s still being talked about, still being memorized. Anything I can do with my family to leave a lasting legacy … it’s what we want to do. It’s all about having fun and giving back to the community.”